The Civil Council of Popular and Indigenous Organizations of Honduras, 6 months after the assassination of COPINH’s General Coordinator, hereby states that: 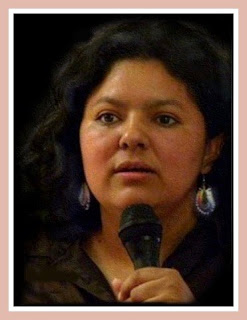 Six months after this vile crime the Lenca people continue to cry over this loss for the Honduran social movement, yet we have not forgotten that her spirit accompanies us as one more ancestor who has joined us in the millenarian resistance of the Lenca people.
Six months after this assassination thousands of voices have risen to demand Justice for Berta and to take up our demands, for which COPINH profoundly thanks the communities, grassroots social movements and civil society from all regions of the continent and world. As a people in struggle we know that justice will come only through the efforts of the grassroots social movement and people of conscience.

Berta didn’t die, she multiplied!
With the ancestral strength of Berta, Lempira, Mota, Iselaca and Etempica we raise our voices full of life, justice, freedom, dignity and peace!