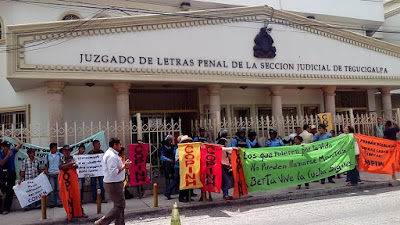 ALERT- Olban Milla from COPINH’s community radios was detained by the police today around 2:20am outside of a COPINH building while leaving to meet up with other COPINH members to go to today’s mobilization in Tegucigalpa in front of the La Granja Courthouse. While he was since released without charges, this is yet another example of unfounded and ongoing persecution against COPINH!
[Declaraciónoriginal en español]
COPINH protested in front of the First Circuit Criminal Court in the La Granja neighborhood of Tegucigalpa today, Thursday September 8th, at 9am, where a hearing against the ex-Vice minister for the Environment and Natural Resources (SERNA), Jonathan Laínez, took place for having granted the environmental permit to the Agua Zarca project in violation of the rights of the Lenca people to free, prior and informed consultation. We also ask for attention to the ruling that will be made today in the First Circuit Court of Intibucá stemming from last Monday’s hearing against the former Mayor of Intibucá Martiniano Dominguez.
COPINH demands the immediate incarceration of all public officials who authorized the Agua Zarca hydroelectric project on the sacred Gualcarque River in open violation of ILO Convention 169 and the rights of the Lenca people.
The case against ex-Vice Minister Lainez is the result of the complaints filed by our General Coordinator Berta Cáceres with the Special Prosecutor for Ethnicities and Cultural Patrimony against the officials who approved dozens and dozens of hydroelectric concessions in Lenca territory in violation of ILO Convention 169 and the right to free, prior and informed consent, bypassing the authority and decisions of the Lenca communities, serving as lackeys for international economic interests and the small group of elites who govern this country.
The approval of the Agua Zarca Project and other illegal and illegitimate projects have true campaigns of terror and repression against the Lenca people for defending the rights of our people and of Mother Earth, leading to the cruel assassination of our sister Berta Cáceres. So-called “development” has mean assassinations, aggression and repression against the Lenca people. What kind of development has to be implemented with the barrel of a gun and indignity?
We demand punishment for all public officials who attack the Lenca people. We demand as a Lenca people that this justice system start to reflect that name and act with impartiality in this case. We call for our people’s rights to be respected and that the justice system respond to the demands of the Lenca people.
RIVERS AREN’T FOR CORPORATE GREED! CARE AND DEFENSE IS WHAT THEY NEED!
With the ancestral strength of Berta, Lempira, Mota, Iselaca and Etempica we raise our voice full of life, justice, freedom, dignity and peace!
La Esperanza, Honduras, September 8th, 2016
Publicado por COPINH