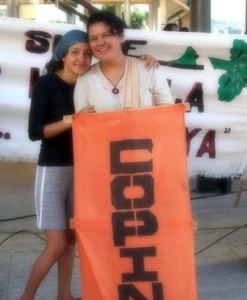 Indigenous Lenca activist Berta Cáceres was assassinated this past March 2nd in La Esperanza, Honduras the city in which she was born. From the beginning, her family and COPINH, the organization she served as coordinator, blamed DESA, a company that is building a project of death along the Gualcarque River. Six months later, her daughter Berta, one of the three who has taken up the baton, writes this letter to her mother.

Letter to Berta Cáceres, my mom.

Six months ago I was in a frenzy, travelling from Mexico to Honduras, time moved in slow motion around me. I had to meet up with Laura and Salva, to say goodbye to your hands and eyes.
The news of your assassination came as no surprise. Days before we had been together writing a communiqué to denounce the re-activation of the Agua Zarca project on the other side of the Gualcarque River. We were hoping to stop it by calling out the complicity of the banks providing the financing, with full knowledge that they had no intention to listen and knowing all too well the extent of DESA’s aggression.
I never believed that you were gone, my tears never flowed from the pain of despair, they flowed from indignation at how the world could have allowed your death, at what type of perverse beings had dared to fill your body with bullets, at knowing that you would no longer have your voice.
It scared me how well you had prepared us for this news, the confidence you had that once your voice was gone ours would be here, the thousands of us speaking for you, to continue crying out with your familiar cry: Justice.
The search for justice has taken us on a tortuous path of silence, but also a path full of many arms, hands and hearts that will not allow Berta Cáceres to die with impunity.
Six months later we are indignant that though we continue asking for the participation of an independent investigatory body so that we can discover the truth about the crime committed against you, the dictatorial and coup-continuing government of Juan Orlando Hernández continues to ignore our request.
We are indignant that DESA-Agua Zarca has no intention of stopping the project, that they send out their engineer Elsia Paz to the mainstream media channels in Honduras to “clean up” the company’s image.
We are indignant that banks like FMO have no intention of cutting off financing for this project of death though they always knew what was happening and never cared nor do they care now what we have had to live through because of their colonialist attitude and blood-drenched money.
We are indignant at the ineptitude of Honduran institutions in a case that is a “national priority.”
Over and over again the words to one of your favorite songs flood my heart, “…and though the night settles in, the moon returns, love returns.” That was one of your principles. You lived through every imaginable adversity yet never stopped, always smiling, always filled with satisfaction fighting shoulder to shoulder with your people, building revolutions in your home and in the streets.
And now that is what we do - smile and fight like warriors, never losing hope.
Six months ago I knew that my arms, my hands and my voice were also yours. Six months ago I declared war on death.
In these six months thousands of voices have cried out: “Justice for Berta!”
On that day, March 3rd, I lost you and I gained countless aunts and uncles, brothers and sisters.
We will continue fighting for you, with your values, with your strength, with your joy, without fear: Berta Cáceres cannot be assassinated.

They didn’t kill my mom and the assassins who wanted to kill her screwed themselves because she is here, because she lives in each and every one of us, because as long as we keep on fighting against that killer dam, against the privatization of the forests and the air, we will keep standing up, we will all keep on standing up and that is where my mom will live on, that is where Berta Cáceres will live.

With the same co-conspirator love as always:
We will get it done, that’s a promise.
We will fight until we win, mom!
Bertha Zúniga Cáceres