DESA Killed Berta! Capture the people who gave the orders! 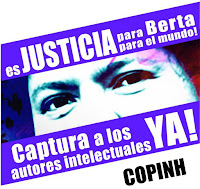 (EN ESPAÑOL)
On March 4th of 2016, just a few hours after the assassination of our Coordinator Berta Cáceres, COPINH and the daughters and son of our sister denounced that her assassination stemmed from the struggle that she lead against the DESA corporation because of the Río Blanco community’s opposition to the Agua Zarca project of death.

Today, 20 months after her assassination, the investigators from GAIPE have corroborated with the upmost possible objectivity the unequivocal link between this killer corporation, its owners, directors and employers in the persecution, criminalization, and stigmatization that she suffered, as well as the planning, coordination and execution of the killing.

The corroboration of the actions leading to her assassination doesn’t come from witnesses or hypotheses. It comes from the words of the actors themselves, from their phone conversations, text messages and WhatsApp messages. They implicated themselves. The key information comes from their own words.

The information analyzed by GAIPE is the same that the Attorney General has had in its possession since at least May 2nd, 2016, which means that for over a year and a half the authorities had the proof and have not had even a minimal inclination to go after the plotters. A mantle of impunity envelops the whole investigation, as we have denounced since the beginning. All of the irregularities, the theft of information, the lack of transparency, the illegalities, the setbacks and suspensions of hearings have now been revealed to be the Honduran Attorney General’s office trying to cover up those who plotted the crime, obviously pressured by the executive and the business groups behind the assassination.

COPINH is not opposed to development in Honduras, what we oppose is this “development” that means the death of our communities, our identity and our territories. We oppose deceitful people filling their pockets at the expense of our dead, at the expense of the death of Berta Cáceres and all of those of us who struggle against this unjust system where the majority is repressed for the benefit of a small economic elite.

The production of supposedly “renewable energy” or “clean energy” are just the cheap words of businessmen who see energy production as a business and are willing to roll over any and everything, including the law and the people, in order to maximize their profits.

The assassination of Berta Cáceres will not remain in impunity. COPINH, the Lenca people and all dignified people in Honduras and the world will fight until the final consequences for their to be justice, for the plotters to be punished and so that no more of these deaths occur. So that as peoples we can continue to defend our territories.

The corporation Desarrollos Energéticos S.A. led by David Castillo, members of the Atala Zablah family, and other directors, the builder of the Hydroelectric Project of death Agua Zarca, financed by the CABEI, FMO and FinnFund banks, supported by USAID, SERNA (MiAmbiente), Banco Ficohsa, Voyth Hydro-Siemens, the armed forces of Honduras, the National Police and private security forces, the COHEP and the AHER, was the corporation that assassinated Berta Isabel Cáceres Flores. We have said it since the beginning and it has been confirmed by the recent investigation.

Because of this, COPINH demands:

1. The capture, prosecution and punishment of all of those who ordered and plotted the assassination of Berta Cáceres and the persecution of COPINH.

2. The cancellation of the concession along the Gualcarque River to the criminal and murderous corporation Desarrollos Energéticos S.A. DESA.

3. Assurances of a real investigation into the crime against Berta Cáceres, by removing all of those involved in the case and creating a new investigation team under the oversight of international organizations.

4. The adoption of effective and immediate measures of protection and security for the legal team, COPINH and the family, all of whom are involved in the case seeking justice.

We call on Honduran society not to allow this case to remain in impunity, justice for Berta means justice for our people and for the many people assassinated at the hands of corporate and State criminals.

We call on Honduran organizations and grassroots social movements to continue forward in defense of our territories and lives. To demonstrate that Berta didn’t die, she multiplied.

We call on international solidarity to join us in these demands for justice.

With the ancestral strength of Berta, Iselaca, Lempira, Mota and Etempica we raise our voices full of life, justice, dignity, freedom and peace!