Alert!  Assassination attempts against the General Coordinator of COPINH and a Community leader of COPINH. 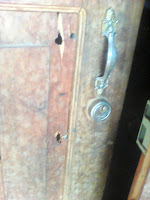 The Civil Council of Popular and Indigenous Organizations of Honduras (COPINH) denounces to the national and internacional public the assassination attempts against the compañeros Tomás Gómez Membreño, General Coordinator of COPINH  and Alexander García Sorto, a community leader de Llano Grande, Colomoncagua.

In two distinct circumstances, yesterday on October 9, these two compañeros were subjected to unknown persons arriving on the one hand at the home of compañero Alexander García where they shot numerous times into the principal door and the window of the bedroom where he and his wife and two daughters were sleeping.  The shots were made with the intention of assassinating Alexander Garcia along with his family.

On the night of the same day, a person shot at the pickup truck of the organization being driven by  compañero Tomás Gómez Membreño, General Coordinator of COPINH, as he left the meeting center of  Utopía en route to his house.

The attempt against compañero Alexander García was a second try, since on May 6 of this year, two months after the assassination of our general coordinator Berta Cáceres, he was shot leaving his house by the ex military Enedicto Alvarado, when Alexander was wounded and almost killed.  This shooting aggression at his house occurred after the ex military had been processed and his family had made threats against Alexander for not withdrawing the denunciation.

COPINH denounces these assassination attempts against compañero Tomás Gómez, who assumed the general coordination of COPINH after the assassination on March 2 of the compañera Berta Cáceres, and against compañero Alexander García, as attempts to silence the struggle of COPINH against the projects of death in Lenca territories, pushed by this corrupt government that is on its knees before the economic interests at both national and international levels.

Likewise, COPINH denounces the shots fired in the Lenca Community of Rio Blanco, by hit men paid for by DESA, as a form of intimidation and threat against the community for opposing the destruction of the Gualcarque River and the seizure of territories of the Lenca people.

Now 7 months since the assassination of our compañera Berta Cáceres, those who oppose the projects of death such as the Agua Zarca/ DESA dam on the Gualcarque River and the dam by HIDROSIERRA on the Negro River in the municipality of Colomoncagua continue to be targeted.  These are attempts to kill those who defend their rights as Lenca people and who strive to build viable alternatives for the development of our communities and of the entire world, and not the development of the pocketbooks of a few.

Now 7 months since the assassination of our general coordinator, neither the government nor the institutions have responded to our demands to cancel the projects the communities were never consulted about, to authorize an independent investigation of the assassination, to demilitarize the Lenca territories and to cease the persecution and stigmatization against COPINH.  We demand answers.

We demand the closing of Agua Zarca/DESA and all of the other illegitimate, unconsulted death projects that can be found in our territories.

We demand respect for the lives of all the members of COPINH.

We demand justice surrounding all those who assassinated Berta Cáceres.

Berta did not die, she multiplied.

With the ancestral strength of Berta, Lempira, Mota, Iselaca and Etempica, we raise our voices full of life, justice, dignity, freedom and peace.