COPINH communicates the following about the repression suffered today, December 15, 2017. 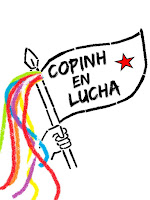 (AQUI ESPAÑOL)
COPINH communicates the following about the repression suffered today in the peaceful roadblock on the road that travels between La Esperanza and Siguatepeque.

In the early morning hours of today, December 15, 2017, a roadblock was set up on the road between La Esperanza and Siguatepeque as part of the protests around the country.  Without delay, members of the National Police from La Esperanza, and the military, presumably the Battalion of Engineers of Siguatepeque, arrived to violently evict the protest using tear gas. Faced with this, the people at the road block including Bertha Zúniga and other members of the General Coordination of COPINH headed to the mountainous area to flee the repression and were pursued for a significant time.  The violent incidents included use of tear gas, hitting people with batons, and rock throwing by the repressive forces of the State against the protesters.

COPINH denounces the excessive persecution with the objective of realizing detentions, intimidating, and beating the protesters.  Today’s repression adds to the violent actions by the repressive forces on previous days against the protests between La Esperanza and Siguatepeque which have included excessive use of force to evict the roadblocks, intimidation, taking of photographs for persecution, illegal detentions, illegal retentions, tracking people, threats of rape and murder, and the use of live bullets on Monday, December 11, 2017.
Publicado por COPINH