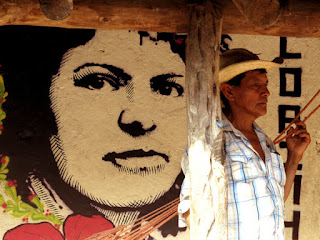 Between the months of April and May of this year we(Kill Joy, Stinkfish and Mazatl) had the pleasure of being in Honduras for four weeks to work on the first stage of the Cuma Project, an independent initiative, in which we visited several rural communities in the Intibuca State. The state is located in the western part of the country, that borders El Salvador.
The initial goal of the project, that took a year of planning, was to visit a variety of communities that have been affected by hydroelectric dam mega-projects initiated by multinational corporations along with the Honduran government. We planned a series of interventions on school facades and communal houses. Our contact and guides, the COPINH (The Council of Popular and Indigenous Organizations of Honduras) is an organization that for more than 20 years have devoted themselves to the defense of the environment, the land, and the local indigenous culture and way of life of the Lenca, who live primarily in the region of Intibucá. The organization also functions as a network for other communities’ struggles on a National and International level. ...MORE>>>