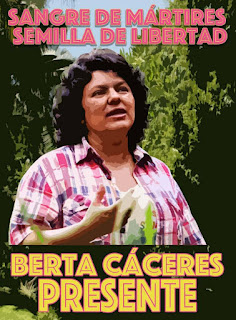 What follows is a brief summary of the many acts of intimidation suffered by Berta Cáceres Flores (referred to hereafter as “Berta”) between July 2013 and March 2016. The majority of these acts were denounced to national authorities and the Inter-American Commission on Human Rights (IACHR) as per the protective measures granted to Berta on June 29th, 2009.[1]

October 30th, 2013         Berta receives a text message on her cell phone saying: “You look good driving, I saw you over by Siguatepeque.” It is important to point out that this same day Berta had seen an automobile belonging to the SINOHYDRO[4] company following her.
LEER TODO>>>
Publicado por COPINH