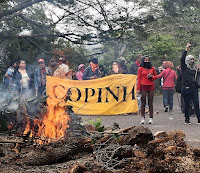 (HERE IN SPANISH)
For over a week, the people have defended in the streets the will that they expressed at the polls. The flagrant theft that they want to carry out through fraud is undeniable. The people know it and the international community should understand that the narrow interests of Juan Orlando Hernández (JOH) and the elite powers that he represents alone are maintaining the crisis by refusing to accept defeat.

It has been clearly demonstrated how the leadership of the National Party, which includes the President of the Supreme Electoral Council David Matamoros, have committed fraud in the presidential elections in order to illegally keep themselves power. Therefore, results from this institution are not and will not be reliable nor in any way credible, and the people have shown as much in the streets.

COPINH is clear that the hundreds of mobilizations, highway blockades, peaceful protests and expressions of resistance go beyond this electoral process. They represent a cry of the people as a whole to move beyond the hatred, violence and submissiveness that have characterized the years of JOH’s government and his other coup-supporting predecessors, years inundated with corruption, impunity, assassinations, approval of spurious laws, handing over of territories, illegal concessions, and poverty and hunger for the majority.

The struggle in the territories and in the streets is the key action in these moments and must continue. The dignity and strength of the people’s struggle in the streets is what has led the National Police and the COBRA forces to set down the arms they were using against the people. We salute this dignified action and call on the armed forces and other repressive state bodies to understand their role as part of the people and respect the actions of that people.

It is clear that the call in the streets is not just about recognizing the obvious electoral victory of Salvador Nasralla, but is above all the cry of the Honduran people to say JOH MUST GO! It is no longer about him recognizing the victory, it is about him stepping down from the presidency and thereby ending the crisis to which our Honduras has been subjected.

COPINH calls on the international community to take all pertinent measures to ensure that JOH’s desperation to maintain power does not lead to more spilling of blood by the Honduran people.

As such, the Lenca people, organized in COPINH demand that:
JOH’s government immediately hand over the presidency to a temporary government of national consensus until January 27th, 2018, the day in which Salvador Nasralla will be seated as President.
The resistance in favor of recognition of the people’s will as expressed at the polls strengthen and consolidate through territorial organization.
That the international community take a side and activate the pertinent mechanisms so that JOH’s desperation to maintain power does not lead to further spilling of blood by the Honduran people.

For the blood shed by Berta Cáceres and all of our ancestors, we demand justice! We demand that end of this killer regime!

With the ancestral strength of Berta, Iselaca, Etempica and Mota we raise our voices full of Life, Justice and Peace.