Berta's death sentence was written eight years ago: COPINH on the 8 year anniversary of the coup d'etat

8 YEARS OF THE COUP
COPINH IN RESISTANCE
The assassination of Berta Cáceres was planned eight years ago, during the 2009 coup d’état, a death sentence for all social movement leaders fighting the destruction of the common natural goo 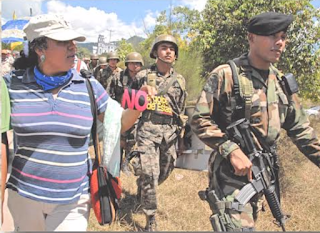 d and indigenous communities of Honduras. With the coup d’etat, a mafia installed a criminal military dictatorship that continued on and deepened the process of depriving the Lenca and indigenous communities of Honduras of the right to make decisions about our own territories. The installed regime, through death and with the bloody hands of its repressive military, financed by ...MORE>>>
Publicado por COPINH