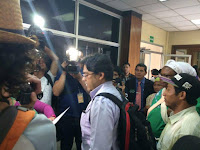 Indigenous peoples and other communities of Honduras gathered together in Tegucigalpa this March 1.  With a colorful mobilization, accompanied by the drums of the Garifuna people and the faces of the Lenca, Tolupan, Garifuna and other peoples, they demanded justice marching towards the Supreme Court of Justice to accompany the presentation of the legal action challenging the constitutionality of the decrees through which the Agua Zarca Hydroelectric Project on the Gualcarque River was approved, an action promoted by the legal team of the Caceres Flores family and COPINH.
The legal filing aims to declare unconstitutional decrees No. 67 and 68 of 2011, through which the State of Honduras converted in law the Contract of National Waters for the generation of electricity by the Agua Zarca Hydroelectric Project (PHAZ), located on the Gualcarque River, and the Operating Contract for the Generation, Transmission, and Commercialization of Electricity for the installation of the Agua Zarca Hydroelectric Project registered in the community of San Ramón, municipality of San Francisco de Ojuera, departament of Santa Bárbara, in territory of the Lenca people of Honduras.  The contracts went into effect in 2011, on the date of their publication in the Official Newspaper La Gaceta.
The petition to declare these decrees unconstitutional is based on the fact that these decrees violate provisions of international treaties such as International Labor Organization (ILO) Convention 169 on Indigenous and Tribal Peoples in Independent Nations and the UN Declaration on the Rights of Indigenous Peoples, as well as contents of the Constitution of the Republic of Honduras. The decrees violate provisions referring to the right of collective property and the obligation of the State to recognize, title, demarcate, and delimit the lands that Indigenous Peoples have traditionally occupied and utilized; the right to determine their own priorities and strategies for development and the utilization of their lands, territory, and resources; the right to consultation and the obligation of the State to consult in good faith with the goal of obtaining free, prior, and informed consent before any action or measure that could affect their rights as Indigenous peoples. The contracts in favor of DESA, the company promoting the Agua Zarca Hydroelectric Project, as well as contracts in favor of other projects in the country that affect Indigenous Peoples, were approved through legislative acts not consulted with the affected Indigenous Peoples, as the UN Special Rapporteur for Indigenous Peoples, Victoria Tauli-Corpuz, has declared.
Decisions of the Honduran Justice system confirm that Legislative Decrees 67 and 68 violate the rights of Indigenous Peoples
The legal challenge presented to the Supreme Court makes reference to the criminal proceedings against Martiniano Dominguez, former Mayor of Intibuca, Marco Jonathan Laines, former SERNA Vice-Minister, and Dario Roberto Cardona Valle, former SERNA Vice-Minister, who have been indicted on charges of abuse of authority against the Lenca people and the public administration for their participation in licensing and amplification of the Environmental License of the Agua Zarca Hydroelectric Project without fulfilling the relevant free, prior, and informed consultation of the directly affected community.
The court’s argument is that the accused and the institutions they represented violated ILO Convention 169 when they did not realize a consultation and obtain free, prior, and informed consent at the moment of granting the operations permit or the construction permit for the project in question.

The constitutional challenge also details the series of legal actions carried out by the Lenca people with the goal of guaranteeing respect and compliance with ILO Convention 169 and other instruments that safeguard them.  In 2010, the Indigenous Lenca people organized in COPINH denounced public officials related to the concession of resources for the generation of energy in their territories, and subsequently, in 2014, they presented 49 complaints against 49 Hydroelectric projects that affect Lenca territory, which have been approved without consultation.
The Lenca and other Indigenous Peoples of Honduras request the declaration of the decrees that enable the Agua Zarca project as unconstitutional and its closure and complete withdrawal from ancestral territory and the Gualcarque River.
In its final part, the legal challenge ratifies that it is presented by COPINH as part of its obligation to safeguard the judicial order that regulates the rights of Indigenous peoples, and particular defend the territory, decision-making, cultural respect, traditions, and everything that constitutes their own vision of the world from the Lenca perspective.

The legal challenge also establishes the murder of Berta Isabel Cáceres Flores, General Coordinator of COPINH, on March 2, 2016, and the implication of DESA with the indictment of its former head of security Douglas Geovanny Bustillo and Environmental and Communications Manager, Engineer Sergio Ramón Rodríguez, as one of the conditions or context that contributes to the constitutional delegitimization of the Agua Zarca Hydroelectric Project, for which the petition requests that decrees 67-2011 and 68-2011 be declared unconstitutional and as a consequence, be declared inapplicable.
Publicado por COPINH